﻿ARE YOU READY FOR THE RACE OF THE CENTURY?

ARE YOU READY FOR THE RACE OF THE CENTURY!

COME OUT AND CHEER US ON! 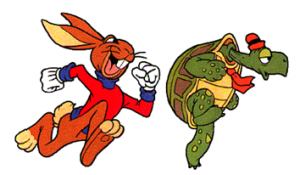 The story goes that the young strapping young Hare was bragging to his old father, The Tortoise, that he could beat him in a foot race. The Tortoise took the challenge. They decided to settle this argument at The Cove 5K Race.

WHO DO YOU THINK WILL WIN?

Donate any amount to the runner you think will win.

Then come out and cheer your runner on…it’s that easy!

Pick the right team and you’ll get bragging rights.

It’s all in good fun and ALL proceeds go The Cove.

COME OUT AND CHEER US ON!