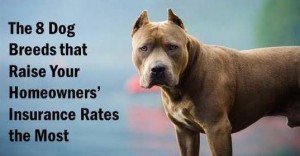 Before you pick out your next dog – check out this list of the dog breeds most likely to raise your homeowners’ insurance.

Dog bites have become the single largest cause of homeowners’ insurance claims over the last several years – costing insurance companies over $1 billion each year. In 2013, the average cost per dog bite claim was $27,862. The individuals most likely to be bitten by your dog(s) include visiting friends, neighbors, and relatives.

Over the years, insurance companies have analyzed data on dog bites, and have increased insurance rates for certain dog breeds, or in some cases, they will simply not issue insurance for specific breeds.

Here are the “Dangerous 8” dogs that may raise your homeowners’ premium the most:

#1 Pit Bull: Over the last 20 years, pit bulls have been responsible for 32% of fatal dog attacks.

#2 Rottweiler: The Rottweiler is the second most lethal dog following pit bulls. A Rottweiler’s bite hits with greater than 300 lbs. of pressure.

#3 Husky: When not trained properly, a Husky’s natural aggression can become dangerous

#4 German Shepherd: Frequently chosen as military and police dogs, they can be trained well, however, insurance companies see them as a risk in a home setting.

#5 Doberman: Commonly described as aggressive and protective, the Doberman will raise your homeowners’ rates.

#6 Chow Chow: The chow breed is typically described as stubborn, protective and very territorial, and they are consistently at the top of the lists of dangerous dog breeds.

#7 Great Dane: Generally undesirable by insurance companies due to their large size.

#8 Boxer: While very smart, Boxers are also regarded as very protective, which can lead to aggression, bites and homeowners’ claims.

To avoid problems with your homeowners’ insurance, it would be wise to ask your insurance agent before you take a particular breed of dog into your home.

Contact us with any questions regarding your homeowners or pet insurance!