From Butcher to Bun: The History of the Hot Dog 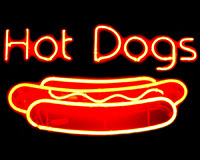 From Butcher to Bun: The History of the Hot Dog

Enjoyed in thousands of backyards each year, and by sports fans in stadiums across the country, the hot dog has become a summer staple. But where did the idea originate to grill a tube of meat, insert it in a bun, and load it with toppings?

In fact, both Austrians and Germans lay claim to the honor. Germans claim the “frankfurter” was created in Frankfurt, where Germans made thick, fatty sausages and coined the term “franks.” But the Viennese point out that the name given to the first hot dogs was “wienerwurst.” In the Austrian language (which is slightly different from standard German), “Wein” means Vienna, and “wurst” means sausage, so clearly they were Austrian sausages first!

Either way, we can thank German immigrants for bringing their native sausages with them to the New World, where they first sold hot dogs from pushcarts in New York City in the 1860s. Some stories claim the bun (or roll) was added simply so customers wouldn’t burn their hands on the hot sausages.

As for the moniker “hot dog,” legend has it the term was coined in 1902 at a New York Giants baseball game. The cold weather prompted one vendor to switch from supplying ice cream and sodas to hot sausages as a particularly apropos alternative. The call went out: “Get your dachshund sausages, red hot!” and the hot “dog” was born.