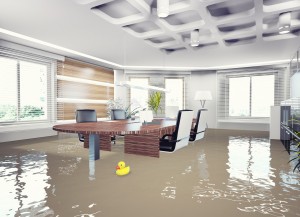 The destructive weather we have endured over the past two years has not only devastated property and lives, but also caused havoc in the insurance industry. Unfortunately, the National Flood Insurance Program (NFIP), with debt amounting to $17 billion prior to Hurricane Sandy, was particularly hard hit, and debt totaled more than $24 billion in mid-2013.

The NFIP currently is available to commercial property owners through large insurance companies. On October 1, 2013, NFIP rates increased; for commercial properties the increase was 25 percent per year until premiums reach the full actuarial cost.
Premium costs

As of October 1, 2013, a premium of $2,800 per year provides coverage of $500,000 for buildings and $500,000 for contents for companies qualifying for a preferred risk policy (in low or moderate-risk areas). For companies in high-risk areas, the standard rated policy is the only option available under the NFIP. Annual premiums start at $1,666 for $100,000 and $50,000 for building and contents respectively.

Separate coverage also can be obtained for buildings and contents. Premiums for standard-rated policies are based on such things as the age of the building, number of floors and occupancy, as well as the degree of flood risk. Replacement Cost Coverage is not available for commercial buildings or contents, and business interruption insurance is also not available through the NFIP
Extreme weather may continue

Statistical forecasts indicate that many cities are at risk if this extreme weather pattern continues, and experts are debating how to respond. Some cities are examining or revising flood plain maps to ensure they reflect current realities, and discussions are underway on measures to make urban spaces, in particular, more weather resistant.

With warnings such as these, businesses are naturally concerned about flood insurance. They should be: According to NFIP stats, 25 percent of businesses experiencing an event such as a flood closed up shop. From 2008 to 2012, the average flood claim was more than $75,000.

However, with the debt accumulated by the NFIP and dire warnings of sky-high premiums in the future, many are unsure about what to do and where to turn.

There is a first step: The Federal Emergency Management Agency (FEMA) has developed an online platform for those who believe they have been wrongly mapped as being in a Special Flood Hazard Area (SFHA). This designation means that SFHA businesses have a very high risk of future flooding; for them, an inadvertent mis-mapping can cost thousands of dollars in terms of higher premiums.

Letter of Map Change
The online Letter of Map Change constitutes a request to be re-designated. If granted, it will save on premiums and even offer some the option of not having to purchase flood insurance. If you believe you’ve been mis-mapped, it may be worth pursuing.
As noted, there is considerable debate in the insurance industry about the fate of NFIP. Changes can happen quickly. If you’re planning to purchase flood insurance, discuss it with your insurance professional, who will be aware of the most recent developments.