Do you have any white out?

Do you have any white out? 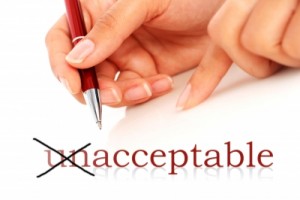 Image courtesy of fantasista at FreeDigitalPhotos.net

We received a request from another agent to cancel a policy for one of our clients.
Nobody likes to lose a policy, but this agent had re-written to save the client substantial money.
That’s a good thing for our client…all things being equal.

Problem was that the signed form was wrong, there was a mistake on it and the company would not honor it.
Totally justified….good companies pay attention to details.
We requested a correction from the agent.
It was their mistake, after all.
The agent called back to say that they knew that there was a mistake on the form, but asked why we could not “just take care of it”
I told that agent that the form was wrong, it contained an error.
“Why can’t you just white it out?” they asked.
I think this is when I got mad….but I kept my cool.
This agent was asking me to white out / falsify a legal document after their client signed the form.
Not cool! Very uncool, in fact.
“Are you serious?!” I asked that agent.
They persisted and asked again in a different way, telling me that we had already received proof of replacement coverage and wondered why we could not, in essence, falsify the document.
Again, my reaction was sort of…total disbelief.
I told that agent calmly that it would be unethical for me to alter the signed form in any way.
They hesitated and I asked how long They had been in the business.
They responded with an answer that sounded like “201”, and then said
“Ok, we will comply with your request.”
I think they were embarrassed.
The agent should’ve been ashamed, honestly.
The phone conversation ended.
A mix of anger and disbelief was what I felt

Without sounding high and mighty, I will say this:
We would never do this…or tolerate this level of unprofessional behavior.
I hope you never, ever get an agent like this.
This agent works for a large agency that’s been around for a long, long time.
Is this what’s happening to the insurance business? I hope not.
We’re professionals and sometimes we make mistakes, but we own them….and then we fix them.
We do not use white out!
We would never ask another professional to falsify a document.
It goes without saying that this would not happen at our agency…I’ll leave it at that.

We’re not your insurance agency? Why not?
Exceptional customer service is our mission.
Let us prove it to you.