Why Emojis Are Taking Over Our Lives 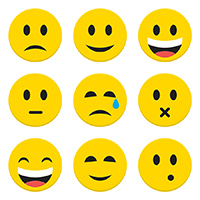 Why Emojis Are Taking Over Our Lives

Recently, Facebook introduced five emojis to replace the thumbs-up icon. But would they catch on? At the time, Jessica Guynn wrote in USA Today, “Acknowledging that ‘like’ isn’t the right sentiment for every occasion, the giant social network is offering new options. Reactions, five emoting emojis, [are now] rolling out to Facebook’s nearly 1.6 billion users around the globe…” Why Emojis Are Taking Over Our Lives

Around the same time, a USA Today headline used emojis, and as writer Esme Cribb noted in the Content Strategist: “Yes, emojis have now officially graced the pages of print newspapers…”

The emoji platform, which tracks online sentiment and builds strategies through the use of emojis, found in a study that some 60% of respondents use emojis weekly, and many more frequently.

And, as Andrea Ayers wrote in the Crew blog: “Over a five-month period…emojis were used over 1.7 billion times on Twitter.” Ayers asks: “What exactly is driving our use of emoticons?” And responds: “The answer is quite simple, they make us feel good.” A lot of Facebook fans might well agree.