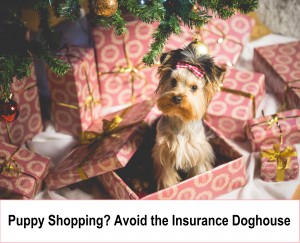 Dogs may be man’s best friend, but when you introduce your new friend to your home insurance company, watch out. Some breeds make the unofficial “Bad Dog” list – which may mean higher premiums, or even worse, difficulty in obtaining insurance coverage.

While you see your dog as a family member, your insurance company sees him or her as a liability. According to the Centers for Disease Control and Prevention (CDC) more than 4.7 million people are bitten by dogs each year. Insurance companies must look at the bottom line and gauge the risk your dog poses. Below are five breeds that make insurance companies howl.

Owners claim this breed is unfairly judged; insurance companies are wary. One study reports that Pit Bull type dogs were responsible for 32 percent of deaths from dog bites.

Originally bred as herding dogs, Rottweilers are calm and confident, but very protective. Their strength and bark can intimidate strangers.

Known for their intelligence, German Shepherds are one of the most common breeds used for police work. As a house pet, they must have proper socialization training.

Dobermans were originally used as protection, so their size and inherent need to protect and defend make them easy targets for shady breeders and dog fight promoters.

Originating in China, Chow Chows are one of the oldest dog breeds around. These dogs are fiercely protective and dislike strangers, a combination your insurance company doesn’t like.

To some owners, the companionship offered by a dog outweighs a potential premium increase; for others, it’s a deciding factor when picking out a puppy. Regardless, the worst thing you can do is not change your policy. So, be honest with your insurance company, and you won’t end up in the dog house.