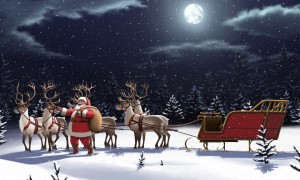 A child’s belief in Santa is magical . . . and funny. As you can see in this favorite story based on a submission to Reader’s Digest from a few years ago:

Nine-year-old Gabriel had heard rumors that Santa might not be real. Deciding to investigate for himself, Gabriel asked his personal authority: his dad.

His father decided that nine was a good age to find out the truth, but didn’t know how to tell him. So he explained that Mom and Dad had bought the Nintendo he’d received for Christmas, figuring Gabriel would read between the lines: Mom and Dad gives him Christmas gifts, not Santa. So Santa isn’t real.

Maybe it was too subtle … Or maybe Gabriel still wanted to believe: “Huh,” he said. “You should have let Santa bring it. That way, it would have been free.”