Trivial Pursuits: Why Do We All Love Trivia So Much?

Trivial Pursuits: Why Do We All Love Trivia So Much? 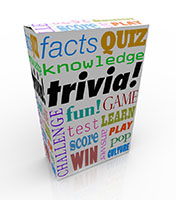 In 1979, two Scrabble lovers, Chris Haney and Scott Abbott, decided to create their own game – Trivial Pursuit. And the rest is game history: Trivial Pursuit sold more than 100 million copies worldwide and earned more than a billion dollars. Because, as Haney and Abbott knew, everyone is fascinated with factoids.

Why people find these tiny bits of useless information so endlessly fascinating is anyone’s guess. Some experts believe the attraction comes from a competitive need to demonstrate superior intelligence. Some attribute it to a curious mind. Others believe it’s considered a method of brain training. And still, others believe it’s just great entertainment.

In fact, trivia games are also good for us. Great bonding activities, trivia competitions also make people happy and reduce stress hormones. Notes Allquizquestions.com: “It enhances our focus, learning and thinking abilities.” Whatever the reason, as The Point Magazine points out: “Quizzing, sometimes referred to as ‘trivia,’ has been a part of popular culture for many decades.” In the 1940s and ’50s, for example, families gathered around their radio to hear The Quiz Kids – five super-bright youngsters who answered audience-submitted questions.

With the arrival of TV, “The $64,000 Question” and other trivia-based contests filled much-needed programming space. The public loved them.

And people still do. The wildly popular trivia show “Jeopardy!” was introduced in 1964 and became one of the longest-running TV game shows ever. And as game-show authority Steve Beverly told CNN Entertainment, it’s “still the best mental exercise on television.” I’ll take Trivia for $200, Alex…