This text is adapted from an infographic produced by the Institute for Local Self-Reliance (ILSR), a non-profit research and advocacy organization that works to curb economic consolidation and strengthen independent, community-rooted enterprise. See the full infographic here, and see more of ILSR’s resources here.

Locally owned businesses play a central role in healthy communities and are among the best engines that cities and towns have for advancing economic opportunity and building resilient places. Small business ownership has been a pathway to the middle class for generations of Americans and continues to be a crucial tool for expanding prosperity and community self-determination. Here, we outline five important reasons for local officials to support independent businesses, based on a growing body of research.

Enacting policies that strengthen small businesses and expand opportunities for local entrepreneurs is one of the most effective ways of reducing inequality and expanding the middle class.

In 2013, for example, an economist at the Federal Reserve Bank of Atlanta found that counties with larger shares of local small businesses outperform their peers on three critical economic indicators: they have stronger per capita income growth, faster employment growth, and lower poverty rates.[1] Using two decades of data from a number of countries, another study found that areas with more small and mid-size businesses had lower levels of income inequality.[2]

Across the country, the rate of new business formation has fallen sharply over the last 20 years, contributing to sluggish job growth and wage stagnation. “New businesses account for nearly all net new job creation,” concludes a Kauffman Foundation research brief.[3]

Cities that achieve higher rates of entrepreneurship and new business creation than the national average are better off. They generate more jobs, which in turn lifts wages. While cities may be tempted to focus only on tech startups, expanding opportunities for residents to launch businesses that meet community needs in retail, services, food production, and other sectors can have an even greater impact.

Locally owned businesses in dense, mixed-use commercial districts generate more tax revenue for cities than sprawling shopping centers, while also costing less in public services. An analysis from the Government Finance Review, drawing on data from a sample of 30 cities in 10 states, found that a community earns about $7 in property taxes per acre on the average big-box retail store, compared to $287 per acre on a mixed-use, mid-rise business district.[4] The compact nature of these districts also means they make more efficient use of public infrastructure and services.

The social fabric of a community is tightly coupled with the health of its independent businesses. Research has shown that communities with a larger share of local businesses have more social capital, stronger social ties, higher levels of civic engagement, and better success in solving problems.

A 2011 study from the Cambridge Journal of Regions, Economy, and Society, for example, found that areas with a greater concentration of small businesses, all else being equal, have improved public health outcomes than those with fewer small businesses.[5] The authors speculate that local ownership of business enhances a community’s capacity to solve problems. Other research has found the presence of independent retailers helps communities retain their residents, especially those with college degrees.[6]

Taken together, these studies show that cultivating a vibrant independent business sector not only strengthens the economy; doing so can advance social goals as well.

Independent businesses help to sustain compact downtown and neighborhood commercial districts, which curb sprawl and automobile use and enable residents to fulfill more of their daily needs close to home.

Several studies have found that people who live near small stores walk more for errands and, when they do drive, their trips are shorter. That’s not all: small retailers also influence how likely people are to take public transit. A study of 3,200 households in King County, Wash. (the Seattle area), for example, found that residents of neighborhoods with the most local businesses logged 26 percent fewer automobile miles than people living in areas with few neighborhood stores, and they were significantly more likely to take public transit to work.[7]

Are you seeking local insurance? Check out our services and feel free to contact us. 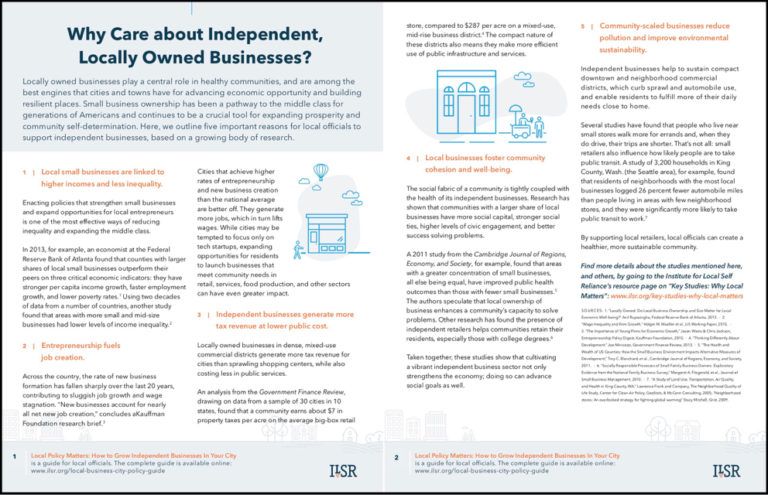